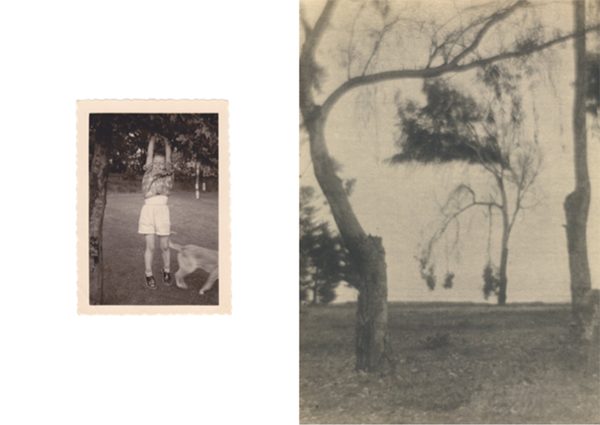 "Come forth, bloggers" From hesitance, found footage, and digging family archives (not only in quarantine)

So, how could one resist contributing to this blog, when you ‘re so kindly asked by the effortlessly hard-working team of SUPERMARKET? Exactly! You simply don’t.

At first I was hesitant (I don’t blog, vlog, you name it) and sometimes I tend to be shy about stuff that I ‘m doing and working on, but hey: Let’s give it a try (while I hope you’re being as patient as lenient), get a cup of coffee (or tea) for an estimated reading time of 20 minutes max, and have some virtual fika together –– it’s the final round of postponed (ex) SUPERMARKET ART FAIR WEEK! And in general, more time than ever, to show some love, to support each other and to engage in all ways legitimately possible.

Including a "word play", that I ‘m unable to discard at this very moment, and to emphasise this to begin with: Of all highly cherished supermarkets (and their tireless employees) running them) here in Northrhine-Westphalia – SUPERMARKET would be the only one, where I ‘d rather be right now to stand in line embracing the state of the art(s) with you!

Anyways... instead of gathering at Skrapan together this week – which would literally and quite practically have been a 'high-light' in itself – getting to know all of the exhibitors, artists, participants and learning from wonderful projects and each other, we have been tuning in from all over the globe through the web staring at screens with a thing some might call "(super) safe distance", because, well – we all had/have to learn it the hard way and already know it – a pandemic happened, with the end nowhere near in sight. No news! (Un)fair and surreal enough. Hang in there.

Although I’ve been following SUPERMARKET ART FAIR from Germany for a couple of years now, this year’s 2020 edition would have been my very first to join in. And after being selected as a PNP, my participation was/would/will generously be made possible through the funding of Tyska Ambassaden Stockholm. Which added to my original excitement to take part.

As a self-organised hybrid and (curating) cultural producer with a background in photography (BA) from Folkwang University of the Arts (Essen,Germany), a soft spot for cross-cultural, co-creating cooperations and plenty of (privileged) quarantine-time to run inwards now, I can devote myself to a personal project, that I kept close to heart and pretty private, too.

The initial momentum: For my BA-project "cloud of witnesses" (2014/15) I was working with photos of my beloved Dutch grandmother, who had passed away and to whom I had not been able to say goodbye forever. The only thing that was left besides memories and memoirs? A photo box, that she had been treasuring her whole lifetime.

To quickly come back to the future and to the point of this contribution... The loss of my grandmother and "cloud of witnesses" are not only accompanying me ever since, but moreover it marked off a starting point, that kept adding up to the realization:

Digging up one's own family archive – whether publicly processed through the arts or keeping it to yourself – is more common than I ever thought it would be.

Which again brought me to wanting to unfold and extend this very realisation. Through artistic research and by trying to understand other artists' approaches on family archives and vernacular photography.

Hence a final MA-research-project, that was/is in the making.

From Poland to Argentina and Indonesia, there is no day passing without coming across inspiring works and artists, that among others help (the way overdue) queering and de- colonizing of (family) histories and archives, may they be well-established/institutionalised or barely even known.

Thanks to the SUPERMARKET ART FAIR Team/Alice Máselníková, who had been asking for blog contributions, parts of my creative #quarantine research project-process in terms of "How to write an interview with a fellow artist overseas" has been speeded up a little to be aired and shared with you.

Starting off with artist Will Vickers, who is working with found photographs of his grandparents, and currently is based, where like so many of us, can't be right now to mingle in person: Södermalm.

Coming forth and almost to an end: You can find our digital conversation on life, death, family, found footage and how to try to make sense of it all, in written word and in its full bloom here. 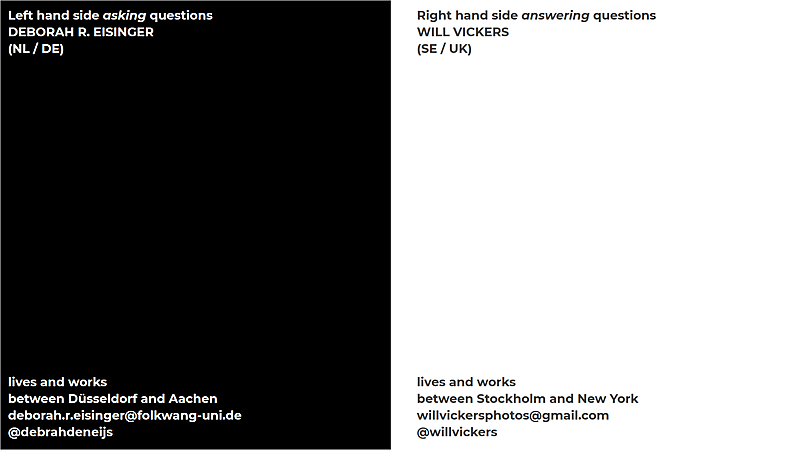 Hope you like and enjoy the read, and that all of you and your loved ones are well and safe, wherever you are.

P.S.: In case, you're lucky enough to be around sunny Stockholm (and in health), you might consider wanting to say hi to Will and his partner Lilli from a safe distance? Also: if you know about a friend of a friend or you yourself might be working in the field of interest described or beyond – very much looking forward to get in touch :) 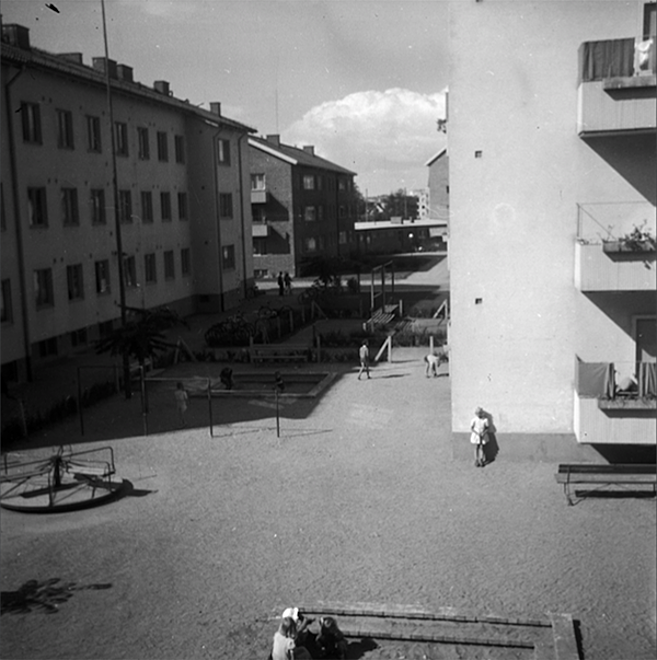 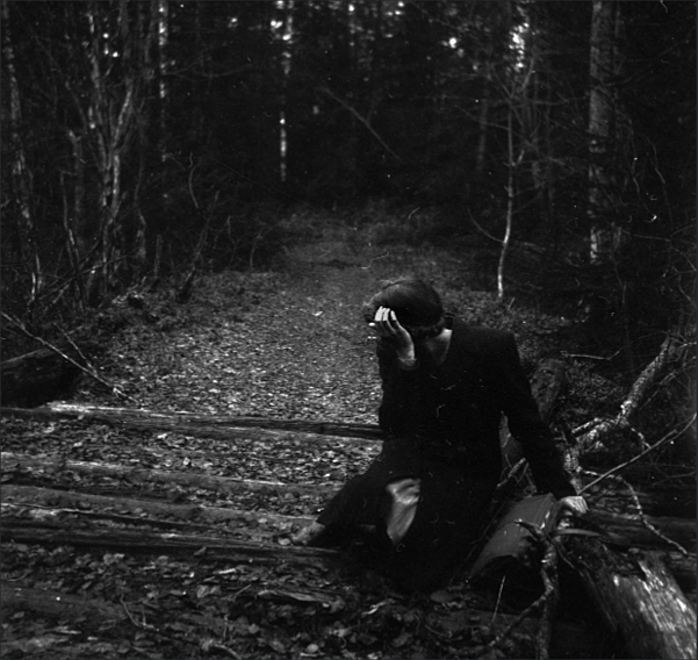 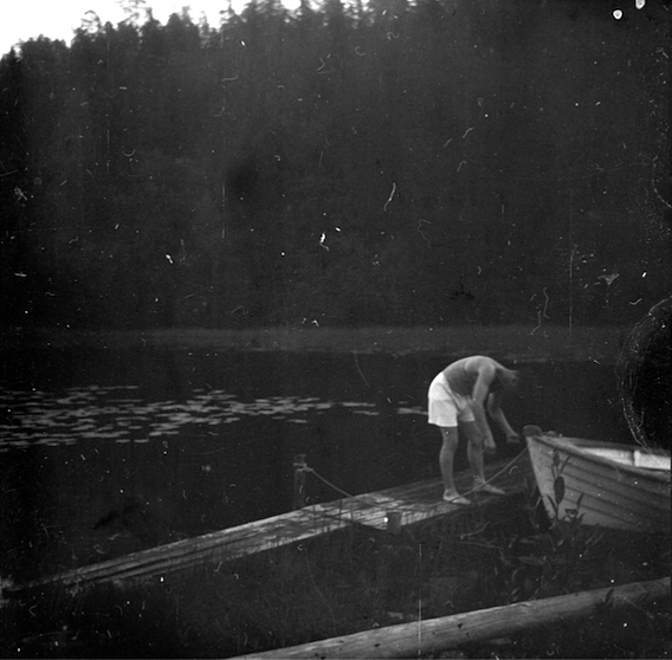 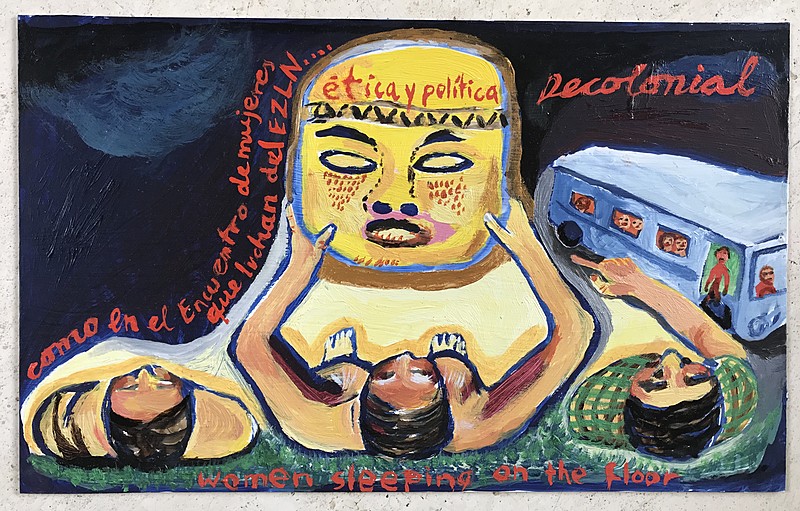 This is a selection of a series of contemporary ex-votos (an ex-voto is a votive offering to a saint or to a divinity) that I painted during the confinement.
These paintings are dreams I had with philosophers that had inspired and supported my artistic practice and research of the last few years.
These ex-votos about my dreams guide my life and give me courage to continue my singular path. 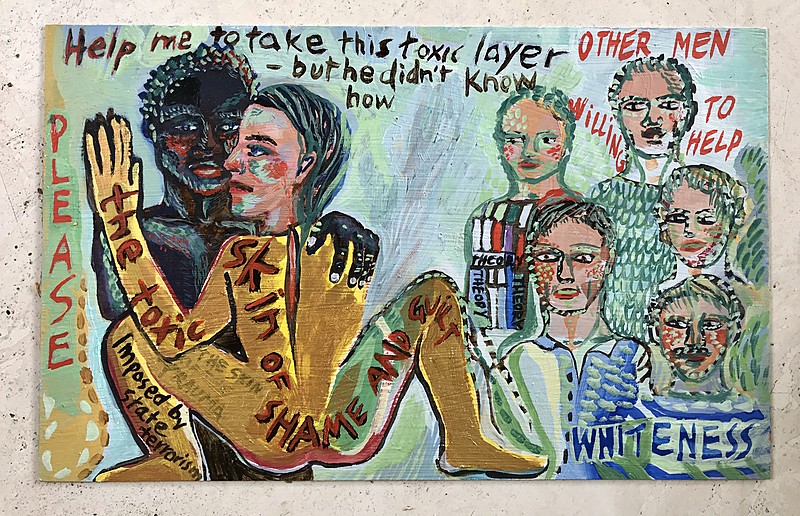 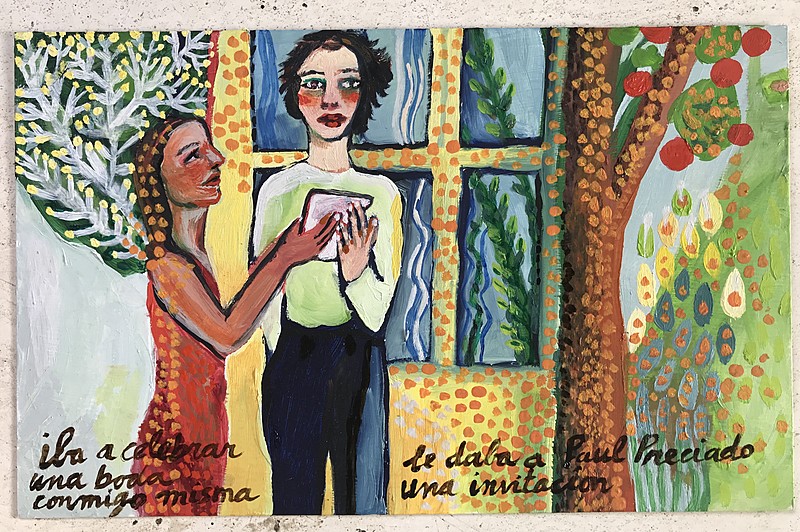 Marisa Cornejo is an artist based in both Switzerland and France. She has a Bachelors Degree in Visual Arts from the UNAM, Mexico and a Masters Degree from the CCC, HEAD, Geneva, Switzerland. Marisa was born in Santiago de Chile in 1971 and left with her family after the coup d”Etat in 1973, to live in exile in Argentina 1973-76, Bulgaria 1977-78, Belgium 1978-80, Mexico 1980-98 where she studied dance, visual arts and collaborated in the art collective La Panadería in México City. In 1998, she moved to England where she became a mother and 2002 found her in Brussels, Belgium. Since 2005 she is in Geneva where she works with the themes of memory, identity and forced migration through drawing her dreams as an artist researcher.
www.marisacornejo.com

Paadmaan (meaning ‘safeguard’ in Farsi) is an independent artist-run platform for contemporary art with an interdisciplinary approach based in Tehran, Iran, established in 2018. Through a variety of curatorial programming, Paadmaan seeks to expand on existing discourses surrounding contemporary art within various Iranian communities and supporting their input – transforming it into output.

Paadmaan aims to develop networking locally and internationally and improve the collective in the contemporary art scene by focusing on research, dialogue and presentation. Paadmaan promotes these by organising exhibitions, events, artist residencies, lectures, screenings, publications and various interactions throughout Iran and abroad. 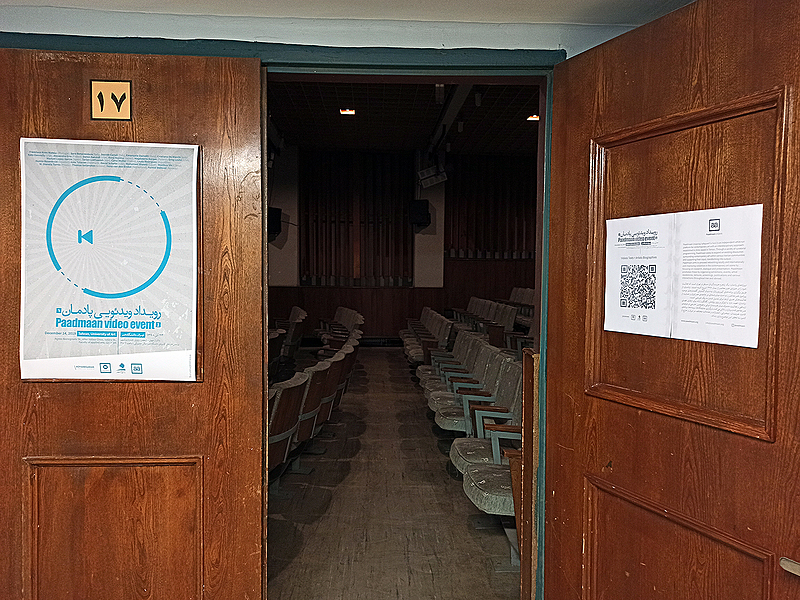 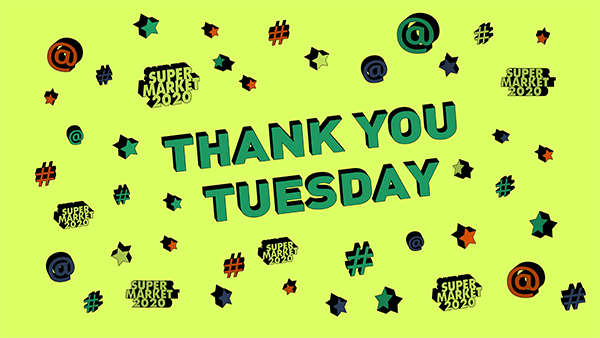 We have to say that the week exceeded our expectations. From what we worried would be a sad week of emptiness and aching hearts of an unfulfilled art fair turned out to be our perhaps most vibrant social media presence ever – and we dare say a great fun not only for us but the contributors and online viewers alike.

We hope that in this simple way we managed to give you a glimpse of what the Supermarket 2020 will be like, with all the creative energy that all the international participants bring to Stockholm. We would like to say thank you to:

A) All of the brave exhibitors who took over our Instagram, Facebook and even Twitter and tirelessly posted round-the-clock. So many wonderful artworks that came up and so many amazing artists that we got to know about. And – above all – we did not get hacked! Videokaffe (FI/DE/NL/UK/USA), Niigata Eya (Niigata, Japan), Extrapool (Nijmegen, Netherlands), Medrar (Cairo, Egypt), Why Quit? (Wroclaw, Poland), Ormston House (Limerick, Ireland) and Detroit Stockholm (Sweden)

B) All of the contributors who sent their materials to the Supermarket 2020 Blog. The variety and amount were heartwarming, your images, texts and reflections full of not only colour and sparkle, but above all stimulating ideas and collaborations.

C) Our online viewers, readers and supporters, including all our exhibitors whom we are looking forward to seeing in early autumn (fingers crossed) for the postponed edition of Supermarket 2020. Your support means a lot to us! You even watched our Live-streamed opening of the cancelled & rescheduled art fair in such copious amounts it took our breath away.

You made our week brighter and fluffier than we could ever dream of.
Take care and keep your eyes on us – the week is over but we are still here and will supply you with regular posts and updates from the artist-run world. 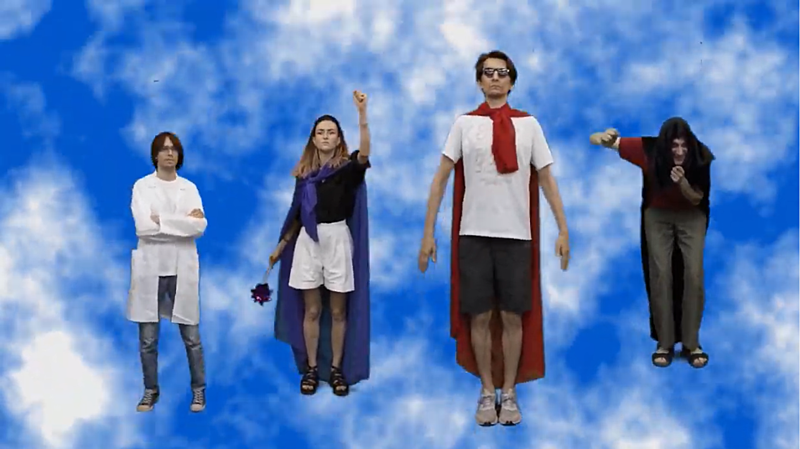 NONSNS (needed ordinary naive speculative new self-organisation) is an independent organisation of three artists: Ruslan Polanin, Masha Cheloyants and Gosha Golitsyn. The NONSNS art group is based in a studio on the territory of the former NIIDAR factory and represents the Moscow art underground as an artistic environment and a live process in which new ways of developing modern conceptual art are thought up and born.

Artists from NONSNS work with various mediums and reassemble their group identities by using of mass culture patterns but always finding ways for their activities outside the mainstream of the art industry. Their artworks which are often absurd and not always recognized as art usually are included into everyday life. 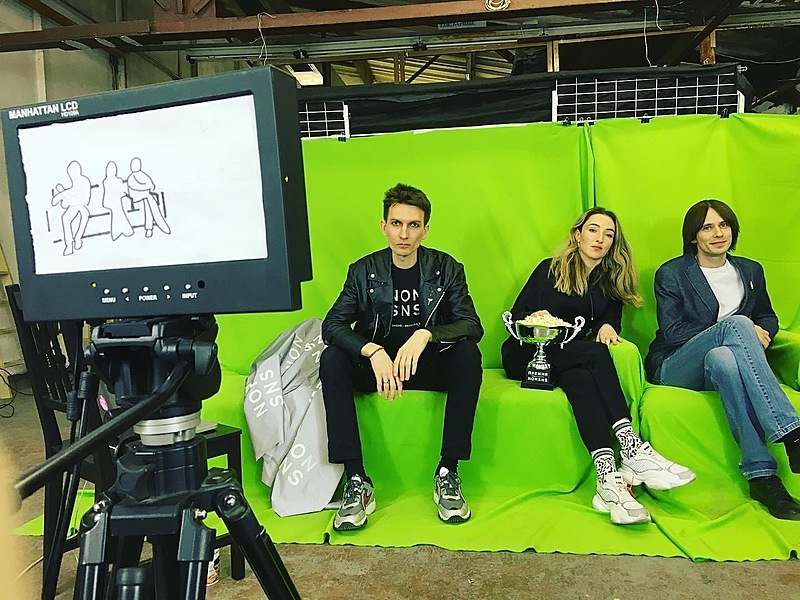 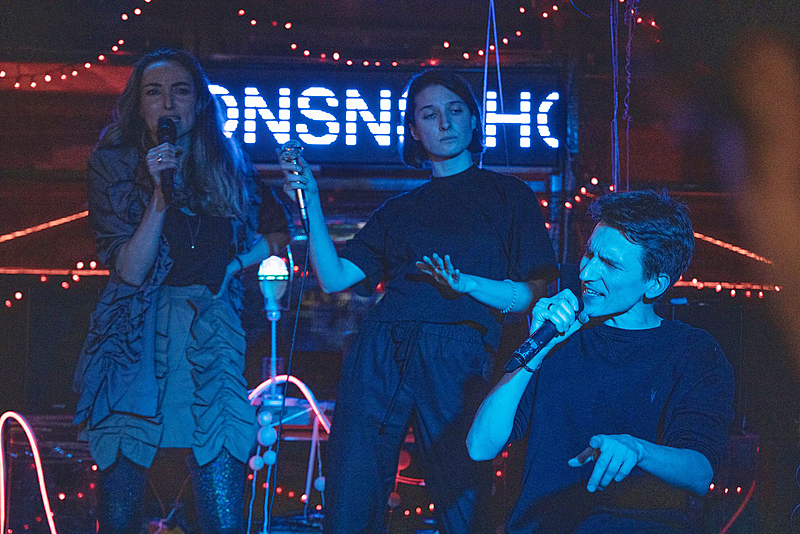 All images courtesy of NONSNS.