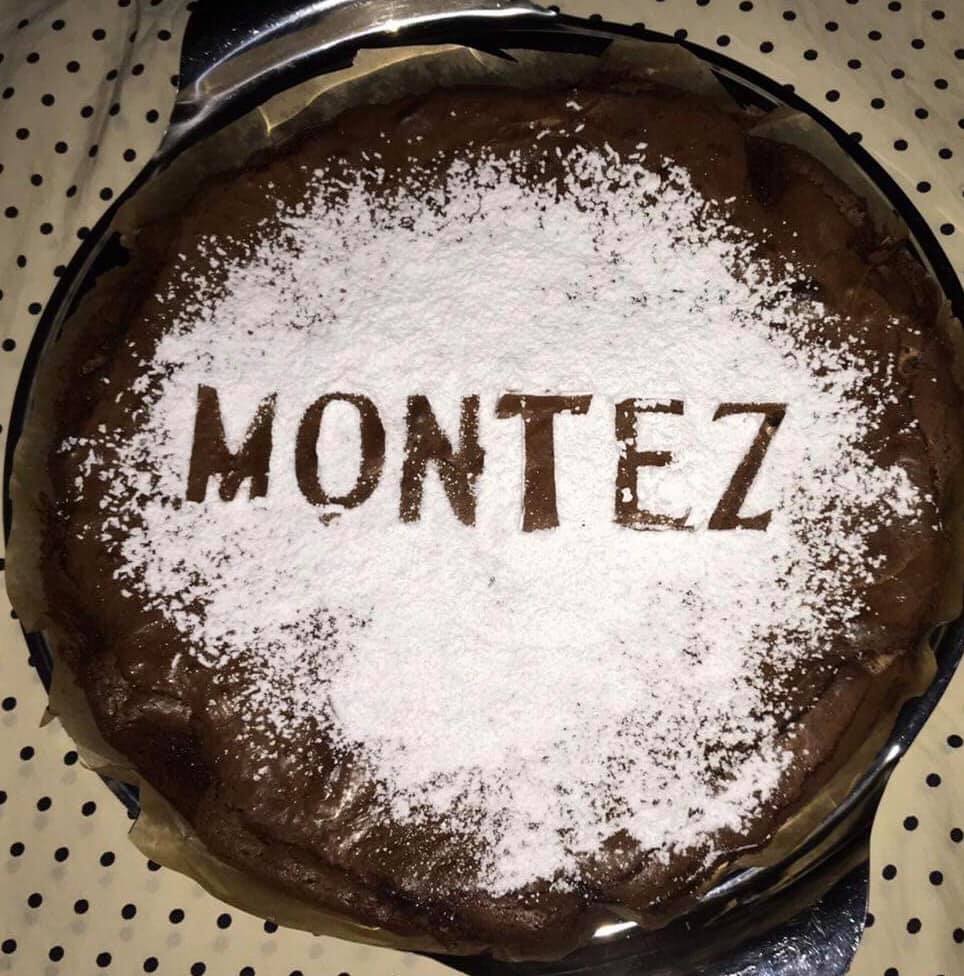 The Kunstverein Familie Montez directs the your focus to ...

In 2019 the Kunstverein Familie Montez expanded with a new space – a newly acquired independent Atelier/Studio space situated in a neighbouring building in the Osthafen called the Kulturbunker.

There is little emphasis on uniformity, differences within a print run are intended and welcome.

Subjects are repeatedly printed, overlapped and placed in different positions.

The final products are expected to be presented/exhibited in the form of a fashion show.

Montez 2 design merchandise for a fabricated museums shop at Supermarket Art Fair 2020. We will present the design studio work of  Montez 2, in the form of a Living Atelier, with photo shoots, videos, live workshops, streaming and a fashion show performance throughout the fair.

In addition to the t-shirt designs KVFM will feature a series of editions: silk screen prints by Kerstin Lichtblau, photography and merchandise by TO KUEHNE, and photography and stitched texts onto canvas by Elizabeth Coleman-Link. Daily K&K (Kaffee & Küchen) in Montez cafe by Ilka Hendriks. 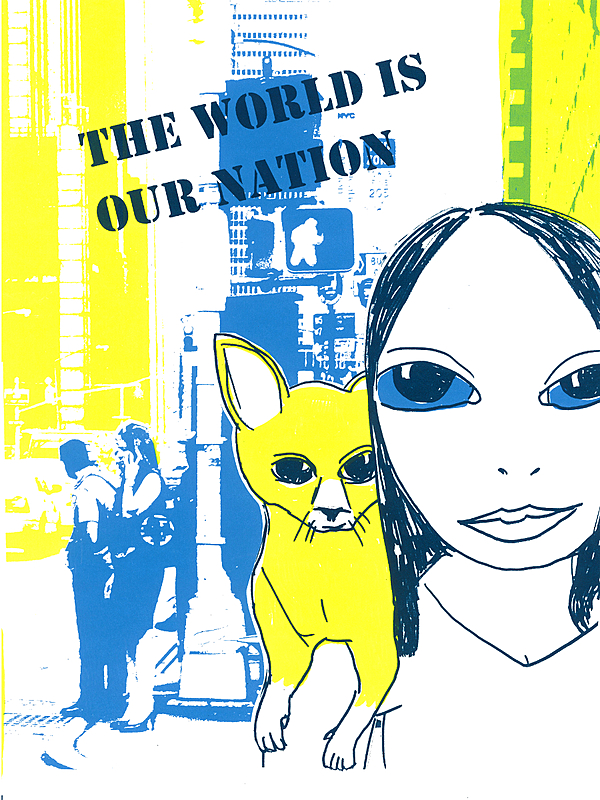 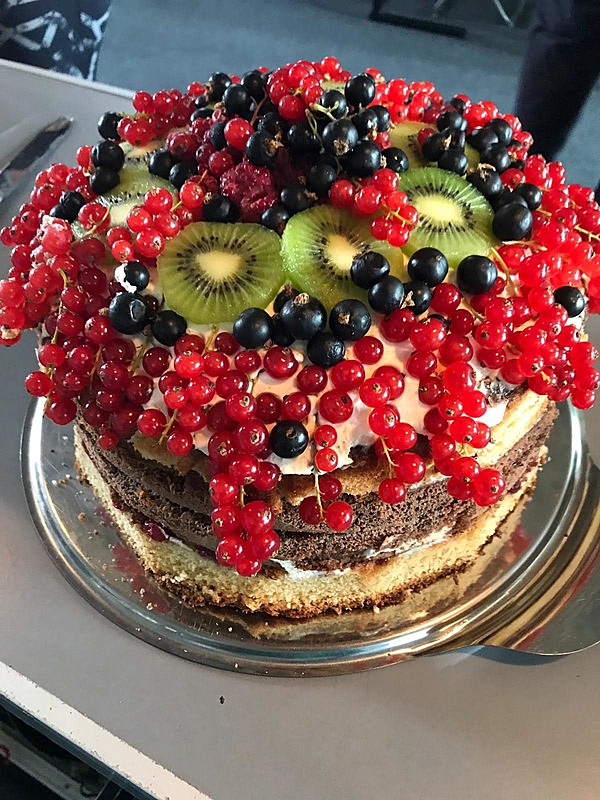 We present TO KUEHNE ... 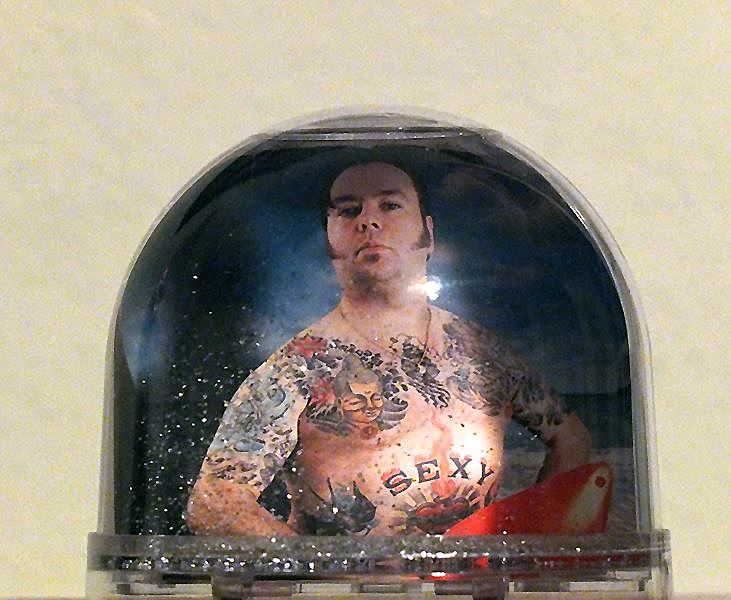 Born 1967. More than 20 years of artistic experience in the areas of painting, photography and music. Many various solo and collective exhibitions in galleries, art houses, bars, offices, fairs, etc. Came to photography via painting.

His approach to a picture differs to that from a classically trained photographer.

“I don’t take photographs, but paintings.” His pictures, mostly staged and often heavily reworked, are influenced by his 20-years’ experience with Rock ‘N’ Roll, theatre and film as well as advertising productions. Many of the protagonists in his pictures seem to have come straight from a film or commercial. Another recurring feature is the lean towards classic themes in his work, like scenes from religion and art history. For years now, he has worked on his self-dramatisation project ‘The Art of Loving Yourself’, with which he tours a travelling exhibition. Not unlike a rock tour.

Another focus of his work is his self-staging image series ‘Aurora To-Realis’, his tribute to Mexican lucha libre ‘Elverdadero Santo’ and his interpretation of religious icons.

Robert Tombs/Royal Canadian Academy of Arts: Some notes on Supermarket 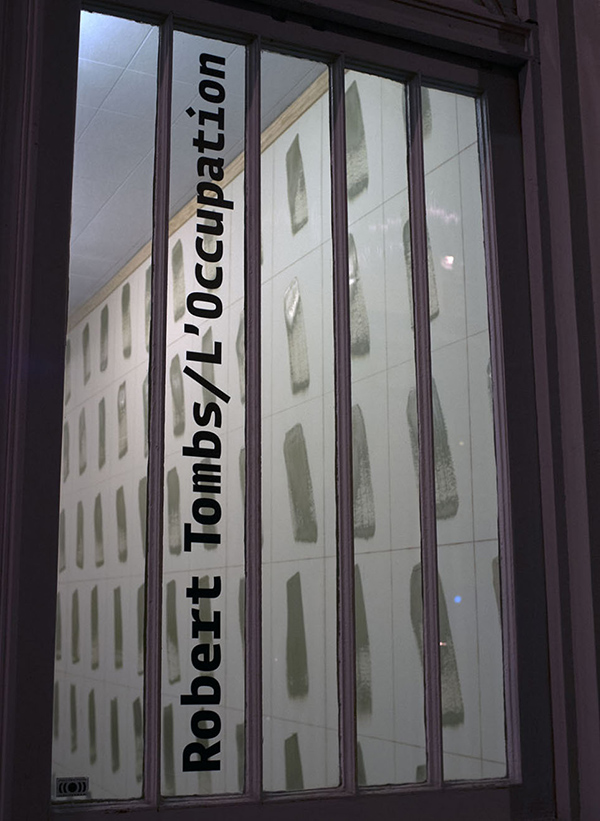 Robert Tombs is the President of the Royal Canadian Academy of Arts.

In November 2011, I had an exhibit in Kingston, Ontario, Canada, at a gallery called Modern Fuel Artist-run Centre. For the Kingston exhibition, I published a catalogue that documented an installation that I had done in Erfurt, Germany. Michael Davidge, who was then Artistic Director of Modern Fuel, had been accepted to exhibit at Supermarket 2012. I was happy when he informed me that he was taking my catalogue to Stockholm. Meanwhile, I moved on to other things. My daughter Sylvia was then teaching English in Saint-Nazaire, France, and I visited her in January 2012. We spent a good deal of time in Paris, tramping the streets, riding the Métro, drinking wine, parler la langue; in short, doing touristy things like photo-documenting the Palace of Versailles and looking at art everywhere. I had no connectivity there, no e-mail or cell phone – it was a clean break from technology addiction – but I kept wondering the whole trip, how could I get an exhibition in Paris?

When I returned to a snowy Canada, and turned on my computer for the first time, there was an unopened e-mail from Michael. He said that there was a gallery director from Paris that had seen my catalogue at Supermarket 2012, Richard van der Aa, director/curator of ParisCONCRET, and he was interested in my work. What a coincidence! So I proposed an exhibition concept to Richard, and it was accepted. Richard staged Robert Tombs/L’Occupation in Paris in March 2013.

I have never been to Scandinavia though I have been exposed to it since I was a young. You see, my father was Consul General to Finland in Montreal when I was a child. We had many Scandinavian visitors to the house who possessed a unique (to me) temperament. We had artifacts in the home, a Swedish carved Dala horse, Finnish pottery and textiles, and a predilection for Bergman cinema. And my father even hosted a garden party for the entire officers and crew of a Finnish Navy frigate!

As I unexpectedly became volunteer President of the Royal Canadian Academy of Arts in 2018, I am now heading an artist-run initiative! We are comprised of nearly 700 established Canadian professionals who come from a variety of disciplines in visual art, design, and fine craft. In writing numerous grant applications, organising symposia and generally supporting artist-run culture, I have gained a new appreciation of the artist-run operations of Supermarket.

So thank you, Supermarket, for your past, present and future achievements in building artist infrastructure, especially in consideration of your admirable tenacity to postpone, rather than cancel, Supermarket 2020 due to the coronavirus pandemic. It is a testament to the power of art. 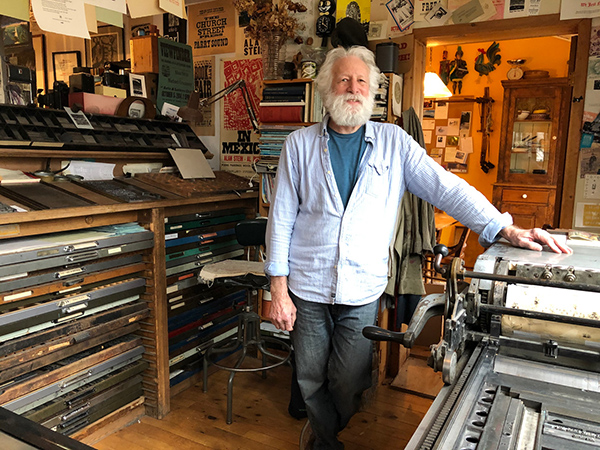 Alan Stein is an artist exhibiting a hand printed book as part of the Royal Canadian Academy of Arts booth.

I divide my time working on paintings in pastel and designing and hand printing limited edition books illustrated with my own wood engravings. My press is called the Church Street Press

In the first image I am sitting in front of my easel wall, there are finished pastels on paper tacked to the wall and part of a table full of chalk pastels can be seen off to the side.This series of pastels is based on my on-site sketches in rural Newfoundland on the Bonavista Peninsula where I have a house and studio in an old fishing harbour, near the town of Trinity, these are part of a larger project, and exhibition to be completed 2022. Next fall I begin on a hand printed book of poems by Newfoundland poet, and musician Des Walsh, I will be creating a wood engraving inspired by the poems and my on-site sketches for each of the 16 poems, the pages will be hand bound into hardcovers in a limited edition of 60 copies. The exhibit will feature the paintings, sketches, prints and book, at the English Harbour Arts Centre, Newfoundland.

The second photo shows me standing at the press, a 1940’s Vandercook #4 proof press, you can also see type drawers behind, and some hand printed broadsides in the background. For each of the books I print I set the type by hand, and then print the sheets one at a time on the press onto handmade paper from St. Armand in Montreal. After all the text is printed, I will engrave the wood blocks and print those directly from the blocks one page a time. This project will take two years from start to finish. 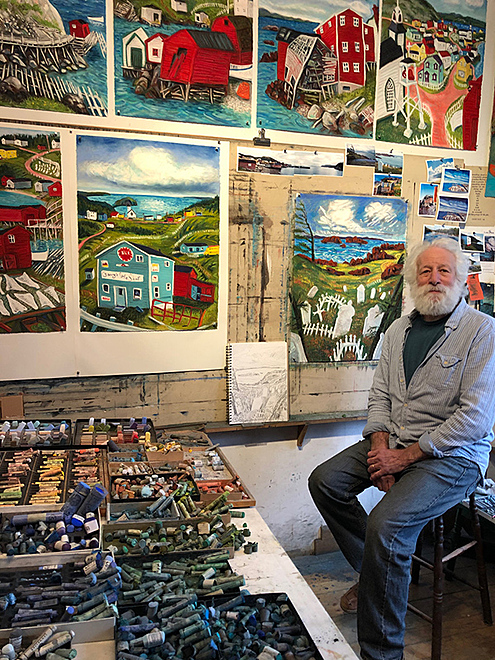 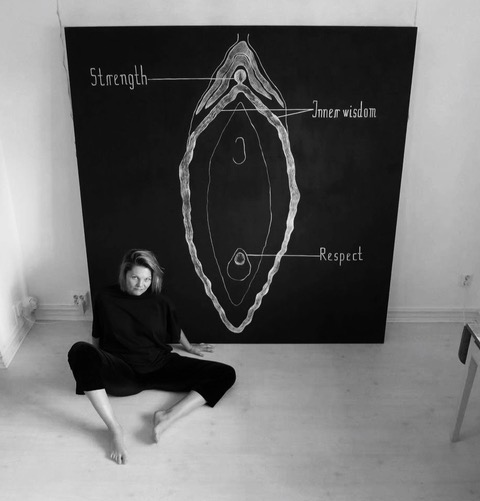 Image:
The painting ‘#metoo’ was made as reaction to #metoo in 2017. Today I am reposting it because of what is happening in Poland, where a bill to COMPLETELY BAN ABORTION is going to be voted in the parliement. Once AGAIN, but this time during coronavirus lockdown when street protests are prohibited. In 2016 a similar ban was defeated after a huge women's protest.
Support the Polish women. Our bodies. Our rights. Abortion is a human right.
#solidaritywithpolishwomen#stopthebans #czarnyprotest#piekłokobiet #strajkkobiet #konstnär#bodyart #feministartist

Video:
Performance ‘I still feel as if I'm a working machine’ by Gabriella Novak is a performative loop, an aesthetic dialogue between the artist and a machine. The artist is presenting paintings, made together with her machine, and a video documentation.

Gabriella Novak (b. 1982 in Silesia, Poland) is a multimedia and performance artist, lives and works in Stockholm. Gabriella works mainly with digital media, painting and performance art where parts of the creative process are replaced by machines or inspired by machine art or, as she calls it, created by artificial bodies.
www.gabriellanovak.com
https://www.instagram.com/studiogabriellanovak/ 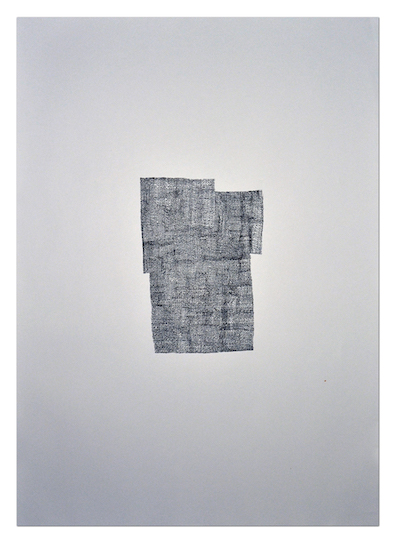 I have to stay at home.
Lockdown.
I cannot do my everyday journey.
Walking.
I follow nomadic thoughts on the white paper.
Drawing.
I wander through landscapes beyond these walls.
Art.